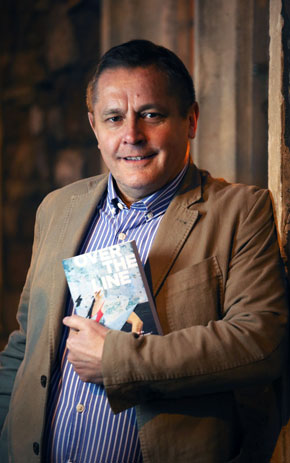 Steve is a Merseysider by chance rather than ancestry. He was born in Wallasey because his American father's first job in Britain was as a lecturer at the University of Liverpool, but he was only six months old when the family moved to Hendon in north London.
At 19, Steve was back in the north of England studying economic history at the University of Sheffield where he met his wife Kim. They stayed in the city after graduating, with Steve working first in the steel industry and then, from 1982 to 1992, for the local council in various community, international and media relations roles. During this period, he served for six years as secretary of British Local Authorities Against Apartheid, which represented the 200-plus councils that had imposed sanctions on South Africa.
Following the release of Nelson Mandela, Steve pursued a new career as a journalist cutting his teeth in sport as a regular freelancer for The Independent and publications such as Athletics Weekly and 90 Minutes.
In 1993, Steve, Kim and their three children moved to South Wales where Steve worked for the South Wales Argus and BBC Wales before setting up a PR consultancy in 1997. Now rebranded as Freshwater, the company has grown to become one of the UK’s largest independent consultancies with a 60-strong team in Cardiff and London.
Steve has been writing for a number of years. He says of Over The Line that it isn’t his first novel, only the first he’s managed to finish. Published in March 2015, it is set in the steroid underworld of South Wales and anticipated the doping crises that would engulf sport only months later. His latest short story, Tinderbox, has been published by Show Racism The Red Card, and he is currently working on a political thriller. Steve writes a monthly column for the Western Mail newspaper/Walesonline and occasionally for The Guardian.
Steve has held a number of public and business positions in Wales, including serving as a governor of the University of Wales Newport and on the boards of the Cardiff Business Partnership and the parent body of the South Wales Chamber of Commerce.
Enthusiastic about all sport, he has followed Liverpool since the Bill Shankly era and run the 400m for Wales as a veteran. In the 1990s, he trained with Olympic athletes Christian Malcolm and Jamie Baulch, who he says were always very kind and patient.
Twitter: @fromstevehowell