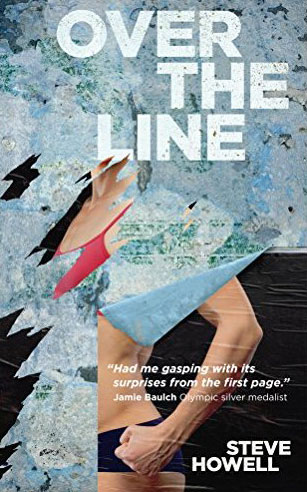 ‘The heroine of British athletics, tainted by doping and death. Couldn't happen? Read Over The Line and decide. Absorbing.’
- Michael Calvin, Independent on Sunday columnist, author of Proud (with Gareth Thomas) and Living On The Volcano.

'A gripping tale from a masterful storyteller'
– Jamie Owen, broadcaster and author.
Published in February 2015, Over The Line anticipated the doping crisis in sport and exposed the over-lapping epidemic of steroid abuse for appearance-enhancing body-building. A gritty and poignant thriller, it’s a story of suspicion, denial and betrayal set in and around the drug scene in a south Wales gym.

It’s the eve of Rio, and Britain’s Olympic poster girl, Megan Tomos, seems destined for a gold medal. But detectives investigating the steroid-fuelled death of her childhood friend, Matt, have other priorities and want to find out what she knows.

In panic and riddled with angst, Megan disappears, only to resurface arm-in-arm with Will, an old boyfriend who was banned from rugby after failing a drugs test.

Her coach, Liam, is dumbfounded and doesn't know what to think. He wants to trust her but has to wrestle with his doubts under growing pressure from the police and media. As layers of Megan’s past are peeled away, she has to face up to some big mistakes - but the biggest of them is a surprise even to her.

Dozens of reader reviews/ratings of the book can be found on Good Reads and Amazon.

Order Over The Line in paperback at the special price of £6.00, including UK postage

Order a Kindle version of Over The Line at £2.99 (via Amazon)